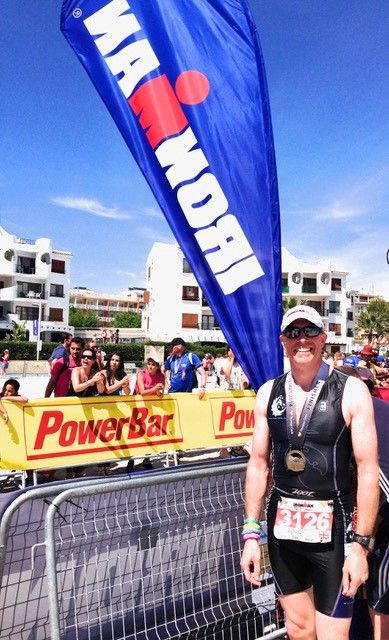 During a 20-odd year career in the Armed Forces, I dabbled a little in triathlon, but didn’t really take it seriously; and just as I was leaving suffered a complete Achilles tendon rupture playing 5-a-side football.

I needed a goal to get back to fitness, and when a work colleague suggested a few of us had a crack at a local sprint triathlon in Dorset I jumped at the chance.  I was hooked, and joined the local triathlon club where Martin Hill was the Head Coach.  Within a year or so I had a few sprint and Olympic distance races under my belt, and I asked Martin to coach me.

Since then (2011) I’ve competed in the UK and abroad predominantly at 70.3 Ironman distance, with the odd endurance swim, endurance ride and half marathon races thrown in to mix things up.

To qualify for the 70.3 Ironman age group World Championships.

Which camp(s) have you attended:

I attended Martin’s first triathlon training camp in 2012 and then a swim weekend camp with Matt and Martin in November 2017.

What do you enjoy about our training approach:

Whilst recently living aboard for the last couple of years, my training and racing tailed off a little, but I am so excited to be receiving coaching from Matt – and Masters of Tri – again.

The Masters of Tri philosophy has fundamentally changed my approach to training and racing.  I now train easier, but see better performance gains. I don’t have to think about what training I need to do, I just follow a plan specifically tailored to my individual needs and the time that I have.  I am avoiding injury, spending more time with my family, and feeling more energetic.

Number 1 fact learnt from our coaching:

Being a gadget and data nerd, I previously spent too much time crunching numbers and faffing with distracting gadgets.  Matt has helped me focus less on the data and more on feel and perceived level of effort. This has really helped me understand my body better, which has led to performance improvements and the avoidance of injury.

Masters of Tri have also helped with my diet – how to successfully follow a Ketogenic diet through training and racing.