Pedal action and pedal technique can result in a great triathlon or a tough triathlon! What should your pedal action for triathlon be? How do you get the most out of your legs in the bike, but save energy for the run?

There is now a mass of technology that is readily available across all sports. It is providing scientists, coaches and athletes the opportunity to assess and analyse performance. Much of it is very scientific and analytical to the point of being distracting to the everyday athlete. Cycling alone has had a huge investment in scientific equipment, research and assessment to determine the ideal means of riding a bike effectively. 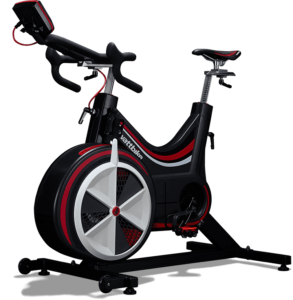 Much of this technology – and the research data behind it – has filtered down to be readily available to all levels of athletes from the novice upwards.

Like any research, and the results that are produced from it, the key is to understanding what the results say and how applicable it might be to the individual.

In this article we cover just one aspect of cycling – the well-known and promoted “best” way a cyclist should pedal.

The shape of force production when pedalling is areadily available now days, lets look into it…

There is no doubt that most great cyclists have “perfected” their pedal technique – effortlessly turning the pedals in a smooth, fluid motion. This same observation is seen in great swimmers, runners, etc who also appear to look effortless, even when maintaining world class performances.

What is true about these cyclists is that not only have they developed the technique for making it look effortless but they have also got the strength to be able to maintain it. They are strong enough to repeat the movement for the duration of their race distance – we will address strength training in a separate article.

These cyclists are able to “feel” the pedals (like ‘’feeling’’ the water in swimming) and maintain a strong rotational force through the pedal stroke. The major component of power generation comes from pushing down on the pedals. With the upstroke (think recovery) being the “scuffing” back from the bottom of the push, pulling up the rear and then kicking over ready to push again. This gives the maximum power per pedal stroke.

Now, it would appear logical to assume this pedal action, if it works for the best cyclists, must correlate to the best performance in triathlon too? 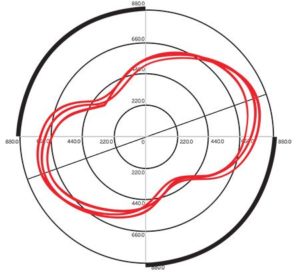 The above execution of a pedal stroke, the “professional” or “optimum” approach, is presented as a peanut shape on the polar-graphs of Wattbikes, etc.

The mechanical perfect shape would be a pure circle but the human is not capable of sustaining equal strength throughout the circle – our leg muscles are physically and mechanically disadvantaged when it comes to pulling back up on the pedals. We will always be less powerful on the upstroke. The “peanut” moving towards a “Sausage” is therefore proclaimed to be the optimum shape.

Not only can this be seen on the graphs, it can be heard – the sound of force will be continuous, a continuous whirring noise. 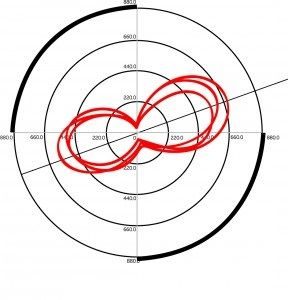 At the other end of the spectrum there are the push down only, or stomp cyclists. This approach is perceived as being the amateur / ‘’noobs’’ technique.

This is clearly illustrated on polar-graphs, it appears as a figure of 8 shape. The power, or force, is indicated with an expansion in the plot with a pronounced pinch as the leg relaxes before the next leg taking over the force generation.

This method is also easily heard, with a stop / start whirring.

Interestingly, this is the intuitive way that anyone new to cycling will pedal – and with their foot placed much more centrally on the pedal – and to go faster, they simply stomp harder!

Peanuts or 8’s for Triathlon?

Have you seen those triathletes running like a stereotypical old person walking? Hunched over at the hips with tight (pulled and cramping) hamstrings and calf’s? This is a common sight in the latter stages of a triathlon, especially long distance, and is the result of using one of the two cycling methods…

There are two main problems with the peanut pedal action:

Pulling up on the pedals recruits the calf’s, hamstrings and hip flexors. These three muscle groups are key to running – burn them out on the bike and they will suffer and let you down in the run. You too will run in a hunched and uncomfortable way!

Figures of 8 is the optimum pedal action for triathlon

The smarter way of pedalling for triathlon is to learn to apply force on the pedals in a way that optimises the human physical and mechanical advantage of strength. The downward push, and to save muscles for the run by recovering on the upstroke. Utilising the push down, stomp, pedal action, with the main force occurring between 1-5 o’clock, is the optimum way to cycle for a triathlete. 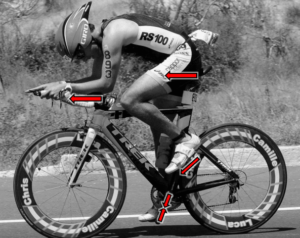 Pushing down, stomping, primarily recruits the quadriceps and glutes and so saving the calf’s, hamstrings and hip flexors.

It is worth noting that with seat position, crank length, cleat position and handle bar stem length alterations even more power and isolation of the quads and glutes can occur. Note the red arrows on the picture to the left

Think beyond the “normal logic” of trying to replicate a cyclist. As a triathlete, you must consider the impact of each discipline on the next discipline. Swimming like a swimmer (and, for example, kicking) will hinder your bike, cycling like a cyclist is also likely to destroy your run.

It is not a widely used (or even known) approach to cycling, but it has had unrivalled success with his athletes/champions across Ironman, 70.3 (Daniela Ryf & James Cunnama), Olympic (Nicola Spirig) and Sprint distance!

This approach may well receive unwanted attention from your peer athletes and coaches, but look at the logic and performances of the current champions; do you want to miss out on potential gains in your future performance?

Like a pure swimmer or runner, if you come from a background of cycling or if you are fortunate to have developed a good cycling technique we do not advocate that you change. Whilst many good swimmers and runners have changed their pure swim or run technique to adapt it for triathlon, this may not be necessary for the bike; across the board, if it’s already working leave it alone and just get stronger!