In Part 1 of our input to the buoyancy debate we introduced why we use buoyancy for coaching ADULT triathletes. We explained that mature athletes and non-specialised athletes need to train differently to progress fast, safely and effectively.

Buoyancy in training and racing

Going back to our observation of the three views relating to buoyancy;

In our coaching experience, triathletes using buoyancy will see results and be more confident in the swim because they develop a strong (arm) stroke. 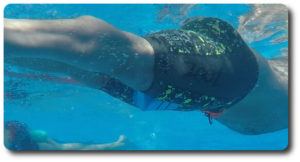 Yet those at the other end of the buoyancy debate, those who rarely use buoyancy in training, are the ones that fear open water and non-wetsuit events more. They fear they will create a dependency on tools, and believe the answer lies in kicking for alignment and speed.

We hope to change their minds.

Reliance or dependence on buoyancy is largely a mental problem.

People are mentally reliant on buoyancy, not necessarily physically reliant. Athletes can be mentally worried weeks in advance, if not all the time. Athletes often have a link to a previous “episode”, where a swim has gone badly in the past.

Over the years we have (softly!) “interrogated” many triathletes about their fear of non-wetsuit races – triathletes that are and aren’t coached by us. Interestingly, we always got to the same root cause of reliance.

For those that are worried because of a past episode, it is an obvious cause. But, for others, it is because they have spent so much time focusing on the traditional approach to swimming (working on drills and prettiness) and not seen results or have become frustrated with slow progress alongside secretly telling themselves: “I´ll be using a wetsuit in the race and I´ll find it so much easier than normal – I won’t even need to kick!”

What else does this show?

It also shows that these same individuals change their approach as soon as they get a wetsuit on! They reduce their kick, that they will have spent so much time and energy working on!

Forget the physical approach and preparation, it is that secret thought that breeds reliance and then fear of non-wetsuit scenarios.

To these individuals, no wetsuit means

We see and hear it all the time on our camps, athletes attend expecting the same as they are used to but leave feeling relieved and moving more efficiently AND faster – because we have treated them differently to competitive, children pool swimmers.

In all aspects of training, our approach is to train the way you will race. A race is not a time to think you can adapt your stroke, make changes to this, that, etc. You don´t have the conscious capacity to do this – training has GOT to make you automatic in everything you so!

Acknowledge your sport and age

Triathletes need to acknowledge that they are not swimmers, understand how the swim fits into a triathlon and know how to train for a triathlon swim as an adult.

In addition to not acknowledging these simple facts, many triathletes often fear the swim (wetsuit or non-wetsuit) simply because they haven’t spent enough time in the water. This lack of swim training is often attributed to 1 of 2 rationales:

We see this so often, triathletes not giving adequate respect to the swim element of a triathlon. This is another reason why they become reliant on buoyancy and wetsuits – their safety nets.

Panic sets in when wetsuits are not allowed because deep down, the individual knows they aren’t the best in the water, they haven’t trained enough, and the wetsuit was their safety net.

These guys don’t feel out of place in water – they have had the hours and hours and it becomes their second environment. Non-swimmer triathletes on the other hand, haven’t had the hours in the water (as children) and if they haven’t committed to swimming sufficiently in their triathlon training, they are never at ease.

This is where people become confused and have mistaken role models. Ex-swimmers and coaches following the swimmer’s syllabus often cannot understand WHY their peers / athletes are unable to do what they do / coach.

The ex-swimmer: “I can do it so why can’t someone else”

The coach: “the manual says it’s the correct way of doing it and the picture on the page shows someone doing it, why can’t my athlete?”

Because they are non-swimmers – and have aged beyond childhood with neuropathways already wired that don’t favour the traditional swim “technique”!

The success we have with triathletes is largely due to our athletes swimming at least 3 times per week, 4 time if possible. Pretty much 100% of their swim time is whilst using a pull buoy and shorts. The athletes develop their strength, efficiency and confidence in water – even without buoyancy!

The design of our sessions factor in 2 specific things:

The sessions do not focus on “technique” or include drills.

Adult triathletes lack the awareness (neuro-control) and mobility of a young / competitive swimmers. Most triathletes (you guys and gals) will, unfortunately, never be able to do the swim technique or drills properly. As they were developed for swimmers(young, flexible and “pure”swimmers). The consequence of committing to drills will:

Note that if coaching kids to swim, the approach can and should be different. More technical work and breaking down of the stroke with drills can take place, but buoyancy and paddles would still be a big part of swimmer’s life.

As coaches it is not in our interests to provide athletes with swim training sessions that will put them into a fearful, uncomfortable, or worse still, dangerous, position. So, we don´t!

Adult triathletes are strong (as adults); this, combined with their competitive nature and desire to improve means (understandably) that they want to go fast.

Unfortunately, no matter how much brute force and how hard they try, especially in the early days, getting a triathlete to be aware of “correct technique, body position, etc” can put them off swimming.

Providing a tool to help them use their inherent strength (pull buoy, buoyancy shorts) always changes their whole outlook on swimming – we see it happen all the time whilst coaching.

Swimming becomes enjoyable and not a chore!

Many triathletes have been running and cycling since childhood, and many are good at both. Knowing this, mindsets become “swimming is a short part if the race that must be done to get to the part I can do and really perform in” – the bike and / or run.

The consequence is they spend minimal time swim training. As noted in Part 1, and in his assessment of the importance of  the swim to the final results at Kona in the Ironman World Championships, “Myth of triathlon swimming: the cost of the Kona swim” there is a very strong correlation between those triathlete who end up on the podium, and top 10, and their background in swimming (or not!)

The training mistake of many

Most triathletes swim sessions (typically 1-2 per week) look something like:

Neither of these approaches are conducive to becoming a better swimmer, and especially not for triathlon, as an ADULT. Working the arms with a pull buoy makes the arms stronger, more effective at generating propulsion and keeps the shoulders healthy. Shoulders will be healthy because the legs will be lifted and not adding strain on the joints. When the arms are more effective it teaches the body to develop a minimal and rhythmical kick.

The focus on the PUSH – the ONLY propulsive part of the arm stroke. This minimises the need for leg kick which is good, because the triathlete wants to cycle and run afterwards!

Remember that kicking is propulsive – BUT will only contribute a very small amount and it comes at a very high energy cost. Ok if you are a pool-based swimmer, doing short distance, not for a triathlete.

Over the years we have been through the official coaching syllabuses (BTF, ASA, etc) and have then branched out to other coaching providers (Swim Smooth and notably with Brett Sutton – Trisutto). This has enabled us to see and apply different approaches and see much improved triathlete performance.

Each of our coaching development steps have influenced how we arrived at the approach we now use – having taken the best aspects from the different approaches we have exposed ourselves to.

We have also learned that MANY coaching approaches are ineffective, therefore no longer a part of our method. These, unfortunately, are the mainstream approaches that include a lot of the swimmer technique and drill work. This approach simply is not effective and wastes the athletes time, as discussed above.

There are a few athletes we coach that we have been coaching through the various stages of our development. We have seen the difference in their performance, their enjoyment and their HEALTH. On average, these long-term, long-distance athletes have taken 14 minutes off their swim splits and 65minutes off their overall Ironman times!

All because we STOPPED treating them like (children) swimmers and treated them like strong adults (using buoyancy, no leg work and no drills).

We fully acknowledge the concerns that too many triathletes fear the swim if it means not wearing a wetsuit. However, we firmly believe (and know from results) that this is because the approach to training is wrong.

Recapping the above, the approach we see is that triathletes:

Essentially, you triathletes are conned by the mainstream coaching systems and media into believing that they should be swimming like a swimmer – and they just can’t!

Buoyancy TOOLs do help, but only when used properly – the same as other kit and gadgets, such as turbos, metronomes and power meters.