Movement patterns rather than technique

Movement patterns rather than technique

Movement patterns – a series of movements made by the body to create a desired outcome, such as the arm movement to create propulsion in the swim.

To start things direct, adult triathletes, especially those that are not “specialised” swimmers, cyclists or runners, you do not have the ability to execute the pure skills exhibited by a specialist!

Training simple movement patterns alongside aerobic fitness should be your primary focus, NOT trying to master skill and technique.

This may sound controversial and off putting, where there is a strong bias in coaching towards the need for the “right technique” to be able to perform well. Perfecting technique not only complicates training and emotions (leading to frustration), it is not time effective.

We look at it differently: we coach to keep athletes healthy, injury free, happy and to perform to their best ability within the confines of physical attributes and everything else in their life.

Whilst this may sound a bit stereotypical (isn’t that also the goal of every coach?), the way we coach is to coach the person – working with their indivdual body type and ability. It doesn’t matter if the athlete is doing triathlon recreationally or as a pro.

If we do this, then the person will perform well and stay / return to health – we have rehabilitated people back to strong form by following this approach.

What is a movement pattern?

Think of movement patterns as the overall coordination of muscle contractions that allow you to create movement. The overall arm rotation in the swim stroke, the piston movement of the leg when making the pedal rotate around the bottom bracket and the swing of the leg when running.

Movement patterns are developed from the day we are born, learning to twist, sit, crawl and walk. These patterns, once ingrained, allow us to quickly put them in to action and modify them as the environment dictates.

One of the first major movement patterns we learn as humans is walking; our brain learns the basic “gait” pattern and can recall and modify the gait to adapt to the environment such as uneven ground, going up, or down, etc.

At this age and state, walking is learnt naturally and WITHOUT coaching. The brain is clever in this respect, it figures the movements out for itself. However, the brain is not yet accustomed to understanding language, meaning that even if parents try to coach technique, the baby will not listen or put it into practice.

The child’s body learns best through movement repetition and simplicity – the basic swim movements, cycling movements and run movements. This is effectively where newbie adults fall – anyone new to a sport after 14years effectively develops best by focusing on movement patterns!

Technique – between the age of 14 and early 20’s (approx. maturation)

This is the time to focus on technique, when the child has accrued hundreds of hours repeating simple movements. The brain and maturity of the child can understand the coaching cues, and the neuromuscular system is receptive and open to fine tune the movements.

Over this period (puberty), the body is “hard wired” and can only be hard wired once! The movements and techniques learned during this period become a permanent attribute. We all know someone who used to swim a lot, then stopped for 20 years and can still get in the pool and cruise up and down!

This is because their neuromuscular system has SET and their strength and mobility within certain ranges has been established (strength, mobility and fitness might drop, but the overall skill is still there).

Anyone coming into a sport later in life needs to experience simplicity and repetition of simple movement patterns. Coaching input here and there is useful but should not be made too complicated or technique focused. Although the adult brain has learnt the art of communication, the wiring is not in place to interpret the coaching into actions.

Adults mainly over analyse and expect too much of their body. We call this “paralysis by analysis”

Remember your body has hard wired to movements you did in your teens, and expecting it to know movements outside these, or thinking it will eventually hard-wired new skills will unfortunately not happen.

Following on from the above, and for an adult triathlete, it should be clear that to follow the traditional approach of acquiring the skill, or technique, of each of these disciplines is simply not feasible.

To become proficient, or skilled, or an expert in any one discipline takes a huge amount of practice, and refinement through puberty. Yet adults are told and coached to try to emulate the approach a specialist elite sports person trains if they want to be good.

Take swimming, as this is often cited to be the most technical discipline to master. A huge portion of triathletes DON’T come from a single sport, competitive background; 22% of followers of Slowtwitch come from a competitive swim background, which means that 78% are adult learners!

Consider Lucy Charles, probably the world’s fastest triathlete swimmer (male and female). She has spent a large amount of her life, from the age of 8, “practicing” swimming until she moved to triathlon in her early 20´s. Lucy could be classed as an expert swimmer.

The question is: as an adult, should you expect to acquire the same skills that Lucy has spent almost 2 decades learning? If you have been reading up to this point, you should realise the answer is a definite NO!

However, “coaching experts”, or inexperienced coaches, are telling us that we must. To do this, do that, bend your elbow at X0, etc to have a good “technique”. Most adults don´t have a clue where their elbow is, let alone its angle; their neuromuscular system is not wired in a way that allows them to be able to sense where it is in water.

Added to this over-complication of movements, you still need to train your swim fitness, by swimming. And do the same for bike and run.

The problem with drills and skills 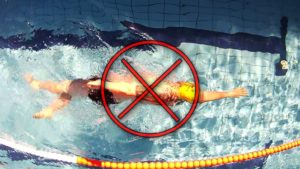 The acquisition of expertise in complex tasks, such as swimming, is an intricate and slow process, hence taking years for swimmers to reach the top. To acquire these skills, drills are used; drills consist of broken-down sections of an overall movement pattern (or sub-skills). The theory being that you break a movement down to perfect it bit by bit. The problem is, these mini movements also take hours (years) to develop and perfect to become beneficial.

Cycling is a lot simpler with less skill required; we´re focusing on the application of movement to the pedal, rather than the skill of bike handling.

Running is basically an extension of one the first movement patterns we learn from a very early age, walking.

Another important point to remember is that your muscles and neuromuscular system WILL be fatigued whilst trying to learn how to move like a swimmer, cyclist or runner. You won’t be able to sustain the movements for long before you are forced to move differently.

The 3 reasons to stop focusing on technique

As an adult (anyone beyond maturation) wanting to progress in triathlon, consider:

We coach to identify the basic movements needed to swim, bike and run and focus on these. The simple repetition of arm and leg movements that your body as a non-swimmer/cyclist/runner can do.

This is different to the mainstream push to do the correct technique, but we know it works.

We coach to help you focus on what it is you need to be doing to improve your triathlon performance and once you accept this, that you´re adult triathletes, you can think and train like one.

The sport of triathlon

Triathlon is a continuous event that happens to involve performing 3 individual sports in succession. The objective is to get from A to C, via B, as fast and efficiently as possible.

To do this, do you need to be the fastest swimmer, biker and runner? Not necessarily and often not desirably; have you noticed how many times someone smashes the bike after a mediocre swim then walks the run?

As a triathlete you need to train to account for the continuous nature of triathlon. This means you need to be an efficient, strong swimmer and biker and then be strong enough to run! Making alterations to movement patterns (simplifying them) will ensure that swimming doesn’t hinder cycling and cycling doesn’t hinder running.

What does this mean to your training?

Triathlon is an aerobic sport and like any endurance event requires a lot of low intensity training. Training allows you to practice the simple movement patterns of each individual component of triathlon over long periods of time. You quickly build up a large number of repetitions whilst also developing an efficient aerobic system.

Aerobic training allows you to develop efficient movement patterns in a safe way. As the name implies, low intensity means less stress on your body both mechanically and hormonal and so less likely to result in injuries.

Movement patterns need to be developed so you can maintain them for long periods of time and repeat them efficiently for the duration of your race. Take an Ironman distance event for example, how many movements are needed for an average performance using the traditional approach: 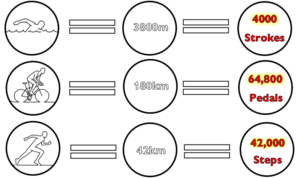 That’s a lot of movements to train for so the simpler the movement the better!

Movement patterns for an effective triathlon

Here is a simple look at our coaching cues for the swim, bike and run to make efficient triathletes. Individual alterations are part of the athlete/coaching development process, but the basics are:

Swimming – Very simply, we break swimming into a continuous cycle with three stages, REPs for adults:

Bike – Simpler: push down, relax up – and repeat! Applying power between 1 and 5 o’clock, recovering for the rest.

Run – a fast walk movement, with a vertical body and minimal leg elevation

Swim coaching is by far the most “tainted”, with so much information about what you need to do that has become the biggest area for confusion – and frustration! We have written about swimming in depth, and why we coach with buoyancy tools. Not only do the movements need to be kept simple, coaching cues should be too. Swim REPs are all you need – forget catching, EVF’s, angles, etc – simplicity is key.

As a triathlete, you need to get fit for what is an endurance event and to get fit takes a lot of repetitive training. 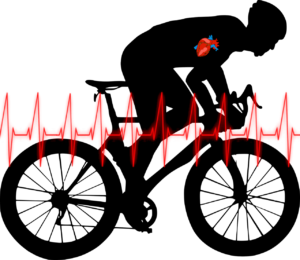 Everyone is different and has differing amounts of time to train, but if, every time you do train, you follow these simple movement patterns you are going to repeat them many times.

Getting fit while repeating movements will allow you to sustain them for the distance you are planning to race. In other words, you are becoming skilled, in a way that works within the ability of your body.

On the other hand, if you don’t heed our advice, you could spend your valuable training time doing swim, bike and run drills, possibly not even doing them correctly, in the hope you become technically correct.

Use your valuable training time effectively by training specifically for your event and body.

Learn the simple movement patterns that allow you to adequately perform the task, repeat them and include some (specific) strength work.

This way, all your training is effective and productive – and it won´t be long before you develop speed and efficiency!