A must listen podcast – Michael Klim

An insightful and inspiring podcast on swimming “differently”– it highlights the importance of breaking the mould. This episode specifically discusses how a top coach changed his long-term beliefs and approach to get the best from everyone in the squad. 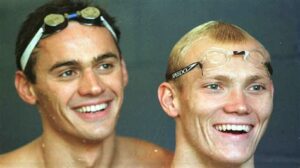 Michael and his coach helped pioneer moving away from the high elbow swimming recovery by working with the body and mentality of the individual (and followed the success of another swim legend, Janet Evans).

Michael joined the Australian swim team, that was under the guidance of Russian swim coach Gennadi Touretski, who moved to Australia and took Alexander Popov with him. Gennadi coached numerous Olympic swimmers in his career.

The Gennadi squad was modelled around the traditional swimming approach that the likes of Popov had perfected. Popov was and is known as one of the best technical swimmers ever having long strokes (reaching and pushing), a low stroke rate, a high elbow recovery and a strong leg kick.

This stereotypical technique has become the one that many coaches still apply today.

The “Popov Drill” and variants (the 6-1-6 / 6-3-6 drills) derived from his style and are very commonly applied today – we DO NOT advocate these for adult non-swimmers!! 😅.

Michael and Gennadi realised that this traditional stroke was holding him back, he needed a different stroke, one that suited HIS body. 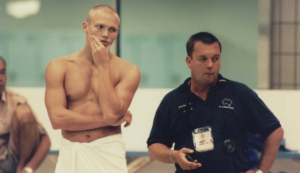 At 6ft 3in, Michael was shorter than Popov, had an athletic / mixed sport background (tennis, basketball, Australian Rules Football, etc), but was also “wild” / aggressive in nature. He was also a champion butterfly swimmer.

Michael’s teammates / competitors were generally taller (around 6ft 7in), were pure swimmers, specialised in front crawl and were “calmer” – more “stroke-disciplined”.

Michael’s nature and butterfly skills fitted the drill type well! They started experimenting with straight arm front crawl by adopting this approach ALL THE TIME. By changing from a high elbow recovery to a straight arm recovery it allowed him to loosen up (the shoulders), rate (speed) up his cadence, get his fingertips pointing downwards faster and to push back faster – and to WIN!

These changes took 18months to become normal and effective, even for an elite swimmer! Changes take time – be patient with your movement changes, learn from Michael’s journey.

Michael was also not a strong (front crawl) kicker and couldn’t sustain a high-speed leg kick over even the short distance races he specialised in (sound familiar?). However, he was able to utilise his butterfly skills and underwater work (butterfly kick in a streamlined position). These skills were integrated into his front crawl swimming; maximising his starts and turns and even switching between a front crawl and a butterfly kick whilst swimming a front crawl arm stroke.

We encourage a “gallop” action in the front crawl stroke by using the natural undulating rhythm that occurs with the arm action; this is what Michael perfected! He could literally swap completely to fly kick in order to use overall body engagement when his legs gave up. Most successful swimmers (professional swimmers, triathletes and age groupers) now incorporate this undulation (gallop), rather than being flat. Watch any major swim competition, triathlon or swimrun footage and you’ll notice they gallop!

Michael was also susceptible to pressure / nerves / mind games at competitions – getting over confident in the build-up, but “choked” on the blocks. He is only human!

Gennadi and Michael aimed for 150 races a year – with the added challenge of them all being UNDER 50second for 100m! These events were learning experiences, to learn to deal with pressure and to try new things – the change of arm recovery, 40m under water before swimming (before the rules changed and 15m was the max under water distance), using butterfly kick.

The 150 races per year worked, he went on to be a world champion and record holder in multiple events.

This is also why we regularly tell people to build experience by entering multiple races per season – long or short, triathlon or single sport orientate. To build experience and learn what works and what doesn’t – who reading this will acquire 150 races in a lifetime, let alone one year?!

The Golden Era of Swimming

Michael was swimming at a time when Australia dominated swimming. His team mates include some of the greatest swimmers in the world – Ian Thorpe, Kieran Perkins, Grant Hackett (who was unbeaten in the 1500m for 11 years), Matt Dun and Brett Hawke (the presenter of this podcast). 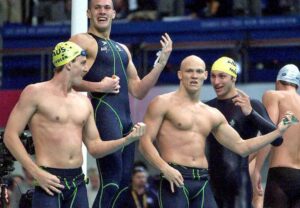 Side Notes on The Other Swimmers

All the above were gifted, but Michael discusses just how committed and driven Grant and Ian were. Grant’s main rival was Kieran, so Grant had every 50m split of Kieran’s written on his fridge and updated as needed to retain his focus on the goal of beating him.

They (Ian, Grant and Kieran) were gifted – tall, long torsos relative to legs, long arms, big hands, big lungs, etc – but they were also EXTREMELY applied, committed and dedicated. Talent only gets you so far, commitment, dedication and hard work solidifies the success!

They were all different in their approach / personality and with their coach, each found a way to swim that suited them personally (movements, training schedules, etc).

Know that following the norm may not (WILL NOT – for you as adult multisport athletes) suit you and will lead to frustration and disappointment.

Believe in the PROCESS, commit, use your natural talent (we all have some).

Know yourself, your processes, your competition, and adapt as needed.