Do you REALLY want to swim better?

Do you REALLY want to swim better?

Do you want to swim better and perform better as a triathlete?

There are some very simple changes you can (should) make to your training. Read on as we debunk some of the myths widely spread in the world of triathlon swim.

Triathlon swimming is not swimming

The first thing to realise is that swimming in triathlon is NOT like competitive swimming! There are many factors as to why, which we will expand on later, the obvious one though being that in triathlon there is often “mother nature” to deal with (even pool swims can become choppy). In triathlon (Swimrun and open water events) you will regularly drift with currents and waves, bump into others, be sucked off course with them, get grabbed, etc, etc.

Basically, triathlon swimming a whole different sport, it is more challenging, but it doesn’t need to be made harder or more complicated. Training just needs to replicate race conditions.

Your goal should be to get out of the water feeling “somewhat” comfortable. You should be fully aware that your upper body has worked to create the propulsion but without causing any real fatigue in cardiovascular terms (so not breathless, feeling too tired to bike, feeling dizzy, etc) and having saved your legs so you can work the bike and run.

Basically, you must be aerobically fit, have good upper body muscular endurance and efficient movement mechanics and be in control of your effort input. These key points ensure your lactate levels don´t reach threshold level, your muscles don’t fatigue part way through, you don’t slow part way through, and you have energy in the legs to bike and run. NOT swimming at threshold is key to being able to successfully get straight onto your bike and ride to your potential.

Look up swimming technique on YouTube and you’ll drown (hopefully not literally!) in the amount of advice; some of it is useful, some is definitely not! The trouble is most of the advice given is based on traditional swim coaching methodology – originating from competitive swimming. Drills are specific and developed for a particular “problem” in a swimmer who is very aware of her/his body and so can use the drill effectively.

Remember that you are a triathlete and don´t have the luxury of swimming in nice calm, warm pools with a lane to yourself and wave breaking lane ropes!

The most important factor, often ignored or not even considered, is that most triathletes, maybe you included, are NOT ex-swimmers and have to learn to swim in adulthood. Adults are just not able to replicate the highly stressful movements coached by traditional swim and many triathlon coaches.

As you get older muscle tension increases, ligaments and tendons tighten – you become less flexible / mobile. This is not bad, tension is good for joint health and overall strength, but it does mean ranges of movement are reduced.

How should a non-swimmer swim?

There is a right way for everyone to swim – as an individual. Everyone has a slightly different anatomy, physiology and perception, each individual needs to work with what they have and develop their stroke.

However, most people have similar movement tendencies and the sport of triathlon is the same for everyone. Although the life-strain we each put on our body is different, with some people placing more undesirable postural strain on their body than others, our basic skeletal and musculature is the same. We therefore say that most people swim in similar way. A lot of men swim with similar actions, and a lot of women swim in similar ways.

For these reasons, we treat everyone as individuals but as a whole too. However, rather than complicate things by doing endless drills in the hope of fix “undesirable” traits, we make our swimmers aware of the “issue” and get them to ONLY focus on it while performing whole movements.

No isolation drills are performed, ever! Awareness and whole movements get our swimmers moving as best they can while also developing strength and fitness.

Remember, adult, non-swimmers will never move in ways that allow almost any drill to be performed correctly or effectively.  Swimming, like all physical activities, results from whole body movements, not a collection of individual movements (drills). Every single aspect of the swim stroke is intrinsically linked to other movements throughout the whole body.

So, how should a triathlete swim? 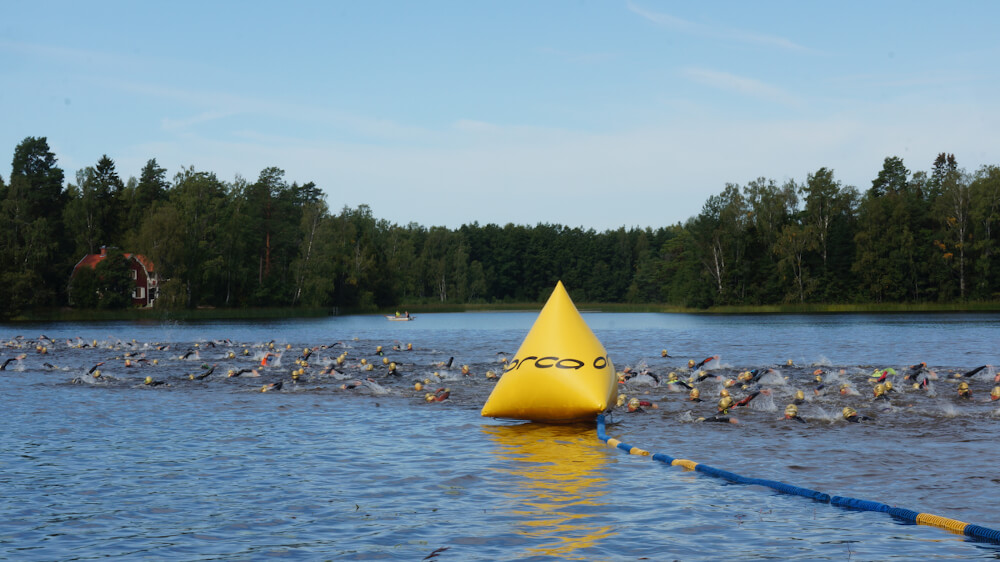 In the big picture of triathlon, the swim, bike and run are not separate disciplines – they are connected physically. This must be taken into consideration when training.

The type of swim training you do should always be “connected” with, and account for, your bike and run training, just as it will be when racing. Training sessions should be mixed properly to complement and improve rather than hinder your overall development.

In triathlon, it is not important to have a strong kick. In fact, it’s NOT important to kick at all, and many triathletes don´t kick, they simply have a rhythmical action with their legs that follows their arm movements. Kicking is expensive, it uses up a lot of oxygen and energy. It also fatigues muscles and the neuromuscular system, the same muscles and nerves that will be responsible for cycling and running, so kick and you will be tired before you even get on land!

You might ask “well how do I balance in the water – how do I prevent my legs from sinking?” Well, simply use the correct tools to allow you to develop your propulsion that will prevent sinking legs, including when you remove the buoyancy tool!

The other big factor for a triathlete to consider are the conditions of the water for the swim; triathletes never have clean water – they will always be surrounded by other athletes (even in pool-base triathlons), there will be currents and there will be waves/swells. For these reasons it is paramount that triathletes develop strong arm strokes and work towards increasing arm cadence.

Strong arm strokes, developed by pushing back HARD, not only provide strong forwards propulsion, they will also be less influenced by the conditions inevitably encountered in triathlon; other swimmers, currents, etc. Add in a higher arm cadence, rather than a slow, lolloping stroke (that relies on more kick) and you will plough through all these conditions much more easily!

The other major reason for developing a strong push with a higher arm cadence is to raise the legs – without needing any kick! If the upper body is stronger and has a long push, the body lifts in the water.

In this example, you would need to use your hands / arms to push back the water and generate propulsion to replace the rope being pulled. Very simply, the harder the rope is pulled (or you push) the more you (including your non-kicking legs) will attain a horizontal position.

You don’t need to actively kick for body alignment, a rhythmical reactional kick that is linked to the arm stroke is all that’s needed.

Swimming is (NOT) complex

Swimming is made out to be the most complex of the three disciplines involved in triathlon, but it is NOT. Over the years we have simplified our swim coaching more and more, and you know what? Our success with complete beginners through to advanced triathletes and Masters swimmers has rocketed!

By keeping things simple, not scientific, we have helps so many individuals reach new levels of performance in short periods of time!

Many “experts” in swimming and triathlon whole heartedly believe swimming is complex and requires hundreds of repetitions of part-movements (drills) each session – wasting valuable aerobic and strength development time and movement pattern acquisition.

The two best triathlon coaches in the world repeatedly present this to the world. Brett Sutton has plenty of articles, and MANY World Champions and Olympic medallist, at all distances. We have heard him repeatedly tell people that “It’s not rocket science, stop trying to think things into action!”

Joel Filliol also has articles and podcasts discussing the need for simplicity – with a great mantra: “Simplicity is the ultimate sophistication”

Don’t get sucked in to the “expert” ways

Now we have named the two most successful triathlon coaches and provided links to highlight their philosophy, why would you listen to the other “experts” who HAVEN’T had the same success? These other “reputable” coaches you will probably know by name; they have huge followings in the media (social and conventional), pushing their complex ways and varied content to keep people entertained and coming back for more views, likes and shares. Just because they are vocal and followed doesn´t mean they have success or the right approach!

Expanding on why both Brett and Joel (who, incidentally was largely influenced by Brett) have had success, and why we are having breakthroughs with athletes of all levels: If you want to excel in triathlon you have to look at triathlon as one sport; you swim into the bike, and bike into the run – no rest. The individual sports are connected to one another.

Swim training (sessions) should always be constructed and positioned in the plan to consider the impact it will have on bike training and run training; train with this in mind and you will race effectively.

Focus on the simple movement patterns and maximise your (limited) time to build your aerobic capacity and strength to swim the distance you plan to race – you don´t need any “technique” work. Swim with the right tools, swim more and more often and focus on those simple things that keep your swimming engaged and enjoyable; your “technique” will develop itself.

The only shortcut to swimming faster is to swim more; full stroke swimming, not drills. Swimming more full strokes in training and being aware of your movements will build fitness and strength, in turn making your faster at swimming and fresher on the bike and run. Spend hours kicking and doing drills (most of which require lots of kicking) will leave your legs constantly tired and hinder your bike and run training.

We keep the swim stroke super simple, dividing the arm stroke into 3 easy to remember and connected phases: REP – repeated.

Don’t complicate it or think these tools will make you reliant on them. Build your push strength and you will swim higher and more horizontal!

Incorporating the tools listed above, swim sessions should be simple!

“If you can’t remember the session content (needing to write it down), it’s too complicated” Joel Filliol.

Sessions need to be effective, not complex. To build fitness and strength you need to get the mileage in. Breaking sessions up into drills and frills with complicated warmups, quantum physic formula main sets, and then complex cool downs is not going to be effective. It’ll be stressful and time will be spent recapping what’s next, rather than just cracking on.

MEDIUM effort / threshold is too hard to provide true aerobic development but not hard enough to build strength. It is always limiting the body’s recovery which means you never recover sufficiently to truly work HARD and build strength.

Too much threshold will result in “one speed syndrome” at best, illness and injury at worse!

Swimming is SIMPLE. Training should be SIMPLE.

If you want to get better think less and swim more using the correct tools (used correctly), with simple sessions and with a mix of EASY and HARD efforts – very little MEDIUM (threshold) effort.