Does a triathlete really need a power meter?

When it comes to training, and racing, a power meter for your bike is now widely promoted to being essential if you are to progress.

Power measurement is much cheaper now and therefore more accessible and can be useful but only if the data can be interpretted and used properly. However, many simply look at power along with all the other parameters from a ride: max speed, distance, total ascent, max and average heart rate, etc without really using any to adjust their training.

This being the case, should power be added to the mass of data we collect?

From a coaching point of view, we don´t use power as a measure, we simply get our athletes to develop bike strength. Whilst this results in increased power, power is not the primary objective. 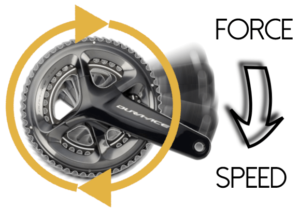 To help describe our point, we must look at what power is.

Cycling power is the measurement of how much force is being applied to the component (pedal, crank arm, pedal axle, etc) through a strain gauge. The associated power meter app then converts the force applied to power by multiplying it by the angular velocity of that component:

Force on component x Velocity of component = Power in watts

It is important to realise that for higher power levels there needs to be a continuous force application and high velocity around the circular motion of the component. For machines this is easy but for a human it would mean pushing down, scuffing under, pulling up and then forwards before pushing down again.

Biomechanically the push down is ideally suited to the human anatomy as it uses our strongest movement – the squat. However, all the other movements are poorly served; humans are not able to apply anywhere near the force in these back-up-forward movements and so unable to generate force through a full 360°.

“if the cyclist applies a force of 150 Newtons to the pedals (150N is the force needed to lift a 15kg mass) and the speed of the pedals in a circle is 2 metres per second (2m/s), the pedalling power output of the cyclist is:

What this does not identify is how the force is applied but the implication is that to increase power, either more force must be applied or the cadence increased – or both.

However, there are numerous studies that confirm that almost all the force (>95%) applied by elite cyclists occurs in downward phase of the stroke and is developed over a long period of endurance cycling:

The relationship between cadence, pedalling technique and gross efficiency in cycling

There are a couple of important points here for both cyclists and triathletes to consider:

We know that good cyclists do generate a lot of power, but is it because they use a power meter?

Prior to the days of power meters, cyclist knew that they could generate power, it just wasn’t easily measurable. However, they, and their coach, knew that they had to get stronger if they wanted more power. Training consisted of a lot of strength training built on top of A LOT of aerobic training – riding hills, into strong winds, on turbos set with high resistances, etc.

Now we know that power is a measure of force and velocity, and that strength is a simple basic attribute that can be developed, we can discuss why we focus primarliy on the development of strength for triathletes.

First, we need to consider the different demands of the sports: cycling compared to triathlon.

Cycling is different to triathlon cycling: cyclists just have to cycle, triathletes need to swim before riding and run afterwards.

Then there is the ability of the triathlete; most triathletes are non-cyclists, starting their cycling as an adult and so are very unlikely to have the “feel” for the pedal.  The triathlete just does not have the time to just cycle as training time must be split between swim, bike and run.

This is why we take a different approach to bike training for our athletes.

We coach to our athletes to focus on the part of the pedal stroke that generates the most power in the most effective way. The aim is to get “super” strong by focussing only on the push down phase at a lower cadence. We term this “STOMPing”. 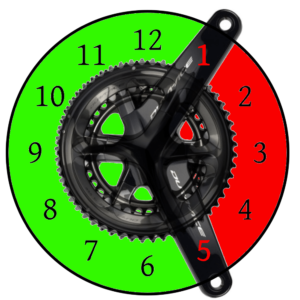 STOMPing only involves applying force through a third of the pedal revolution – between the 1-5 o’clock position. Before and after this the leg relaxes. This drastically cuts down on:

Remember, scuffing, pulling and flicking the pedal through the other two thirds of the revolution fatigues the primary “run” muscles. Mix in the fact that the pedal cadence is lower (5-15rpm lower than the traditional 90rpm) and you see how much energy you can save.

If these points weren’t enough, STOMPing optimises the strongest range of movement the body can utilise (squatting with gravity, on a bike).

Rest assured, overall rhythm is not lost – there is no dead spot that ruins flow; the relaxing leg is STOMPed back up by the other leg.

Why it needs to differ

In spite of the data and research to the contrary, many cycling and triathlon coaches prefer to coach the traditional cycling technique of applying force through 360° by pushing down, scuffing back, pulling up and forwards, and all at a high cadence (90+rpm).

Apply this approach to a triathlete over Ironman distances and consider how many pedal revolutions this takes that fatigue the legs:

90rpm x 360min = 32,400 revolutions (per leg). That´s 64,800 full revolutions of trying to apply force throughout the revolution. Not only is this using a HUGE amount of energy, it also fatigues the neuromuscular system.

Compare this to a STOMPing / lower cadence approach:

To become an effective STOMPer, you need to have strength. The stronger you are the more force you can STOMP and the faster you will go. The more strength your legs have and the more you use them, at lower cadences, the lower the strain on the cardiovascular system.

Next time you go for a bike session test this out: have a warm up, then add resistance to the drive chain and pedal at a low cadence (70rpm for men, 80rpm for women) for 10minutes – note your heart rate.

After 10minutes reduce the resistance but “spin” at 90rpm for 5minutes. What happens?

Your heart rate and breathing rate will shoot up, and your power/pace/speed will drop.

Spinning may offload the legs but will massively load your cardiovascular system. This uses valuable energy that you need later for the run!

We aren’t talking really slow cadences, just low compared to the suggested 90rpm of mainstream cycling coaching. The gender of the triathlete will dictate the specific cadence range: women typically between 75-85rpm, while men between 70-75rpm. There are exceptions, but this is a starting range.

The reasoning is that women generally have a more effective aerobic tolerance while they recruit less muscle fibre per action than men – largely linked to testosterone levels and the influence of testosterone on the body. This is why women have a higher cadence range than men – because they fatigue slower!

Non-cycling adult triathletes may lack the feel for the pedal, but they have strength. They can STOMP in bigger gears and will experience the same, or greater, overall speeds for less fatigue and strain than they would attempting to pedal like a pure cyclist. The great cadence debate has been around for years, but the real science behind it is nearly always overlooked.

Now we have established that we coach our athletes to apply force through 1/3 of the revolution, or 120°, at lower cadences, you can see why power training becomes much less of a necessity.

Building our athletes strength and fitness does increase their power, but we do not train for power. They are focusing on STOMPing down, getting stronger and able to apply more force to the pedals between 1 and 5 o’clock. Power meters can sense this, but remember they count the total force applied around all 360°.

Because of the STOMPing and strength development, our athletes are riding faster bike split AND running faster off the bike!

They can STOMP harder for longer and their run muscles are not fatigued from the extra use and thousands more revolutions!

Cycling power is a measurement of force around 360° multiplied by the speed of the component tracking the force.

This may work for pure cyclists, some better ones being able to feel the pedals, but this has been developed over hundreds of hours of riding for years. The difference for you as a triathlete is that you probably will never have the time to develop this same feeling, and even if you do, you also have to swim and run around the bike section in a triathlon.

Cycling and triathlon cycling are different! Triathletes need to be more tactical in their approach to training and racing to allows them to run strong. This is why we coach to STOMP and build strength at lower cadences.

Think about the sport you are doing and how you can sensibly achieve overall good results. A more powerful faster bike split with high cadence and high run muscle recruitment will hinder the run. This, in turn, will result in a slower overall triathlon!

What do you really want?