An alternative periodisation for triathlon

An alternative periodisation for triathlon

Periodisation for triathlon? Linear, reverse and polarised periodisation are the common methods applied to triathlon. So what is periodisation, how does it work and what variations are there?

Periodisation is simply the method of planning a season / or multiple seasons to achieve peak performance at a desired time to help dictate training sessions. It applies to all sports. Periodisation at amateur level often addresses a single season. At elite / pro level, periodisation is often a 4-year cycle to prepare for the next Olympics!

Depending on the sport and training approach, there are many variations; linear, reverse, undulating, conjugated, etc. In most sports, triathlon included, most coaches use the method taught by their governing body and derived from the original work founded by Russian sports physiologist Leonid Matveyev. This was later adapted and translated by the Romanian sports scientist Dr Tudor Bompa.

“Dr. Tudor Bompa is recognized worldwide as the foremost expert on periodization training. He first developed the concept of periodization of strength in Romania in 1963, as he helped the eastern bloc countries rise to dominance in the athletic world.” Tudor Bompa Institute

The linear model is often referred to as the “traditional periodisation” model. Like most of the periodisation models, it was developed for single discipline, STRENGTH / POWER sport (track and field events, all forms of weight lifting, etc).

For single discipline sports linear periodisation works well as it becomes more specific towards the event in question.

Aerobic / endurance sports have since “borrowed” the methods and applied them to their sports.

How the traditional model works

Simplistically, the traditional model aims to prepare athletes to peak at a set point by changing the training stimuli to meet the competition demands. The season would begin with one stimuli / focus and transitions to a different stimuli / focus towards the end of the season – when needing to peak. This is a gradual switch, over weeks / months.

This single sport / strength model has been adapted for AEROBIC sports (not just triathlon); here is a brief overview of how a triathlon season is commonly planned: 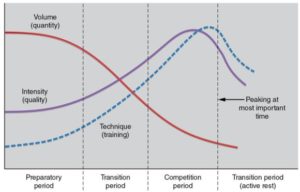 Pay close attention to the arrow showing where peaking should occur – in the middle of the red and purple line.

What this means is that the athlete will (should) perform somewhere between the low intensity and higher intensity workloads.

The traditional periodisation model typically has one long training block, typically consisting of the Preparation, Transition, Competition periods as shown in Figure 1. The overall programme can last 24 weeks or more and over this period there will be repeated build/recovery weeks, such as 3 build, 1 recovery within each period. 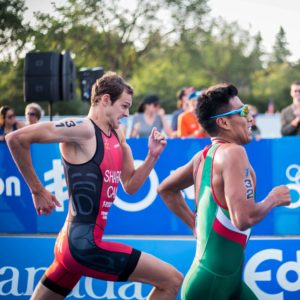 The traditional model has been successful for many years and will continue to have success, but the success isn’t necessarily attributed to the method.

Any given athlete can make good progression following any training method, especially pro / elite athletes who also have genetic advantages! However, the over-riding reason for this is that adopting the model provides structure and promotes CONSISTENTLY and consistency alone helps improvements.

The question is, will these endurance athletes achieve results faster and safer by following another method?

Is the linear method the best method?

The major “problem” with the traditional method is that it swaps training stimuli – reducing aerobic work with increasing higher intensity workloads. The body doesn’t adapt to multiple training stimuli very effectively, but it can make partial gains simultaneously.

The linear model, based on developing a single sport power event, starts the season at low volume and then builds intensity towards the peak period. This gets the athlete ready to move fast or lift a heavy weight on race / lift day.

Linking this to endurance sport, this means, if aerobic volume is decreased closer to race day, the body will adapt to the decreased stress by becoming less aerobically conditioned. Remember that as a triathlete, an endurance athlete, your aerobic fitness it the number one priority. Prioritising low intensity (aerobic) training, adding strength and being able to consistently train this way, week- after- week, year-after-year is key to long term development.

As an endurance athlete, we don’t want to reduce your aerobic conditioning as you get ready to race.

We therefore coach using a model that does develop the specific attributes that you need to complete an aerobic event.

A more appropriate periodisation for triathlon

By adapting the linear model, we can create a periodisation process that is more suited to triathlon. We don’t exactly follow the reverse or polarised model, as each athlete is different, but the general trend of their season is biased towards a “reverse” approach. This will all make sense in a minute.

By “reversing” the aerobic training aspect of the linear model, we are training the body to adapt to more low intensity / high volume efforts later in the season. The aerobic volume is gradually increased week to week – simulating the durations you would face in the race!

As well as gradually building the low intensity, aerobic distance, we also build your strength and threshold elements. It is important to expand a little on these components:

Note, threshold / race pace training is not used as much as the traditional triathlon training model, instead focusing more on below race pace and ABOVE race pace (strength work).

Due to the gradual increases, overtraining and injury rates are much lower. Not only because the stress is built slowly, but also because it allows the you to judge your own wellbeing day-by-day knowing the steps upwards are small. We need the ongoing consistency to help you continue to improve without the need for recovery breaks that disturb your development.

No rest for the wicked

We barely taper our athletes! Tapering (decreasing training stress) before a race, in theory, allows the body to rest and then perform better. But remember, the body adapts to stress – the body perceives training less as a new stress!

This means that your body adapts to the new demand of less training – you don’t “lose” fitness, you adapt to less demands!

The body begins adapting to (less in this case) stress within 72hours. That means that your body will adapt to a lower fitness level in 3 day. Thus, our athletes typically train up to 3 days before a race before they taper – and the amount of taper varies from one athlete to the next.

How we gradually build the stimuli

Our approach to periodisation consists of blocks of training that each lasts (typically) 15 weeks. Therfore, each year will have 3 blocks that will follow-on from the previous block. We repeat this process, making the athlete progressively fitter and stronger.

Typically, and noting that we are all different, this is how we increase the training stimuli: 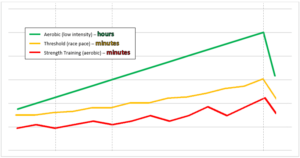 Note there is no technique line in the graph above?! As many of you know, we DON’T advocate technique work for triathletes. We coach simple movement patterns that multisport adults can manage. If we were coaching a youth swimmer, cyclist or runner, we would incorporate a different strategy.

Initial concerns and, then, revelations

The small increase to each training element is so gradual that it initially looks and sounds too easy. The differences between our periodisation for triathlon model and the “norm” can, and often does, cause worry amongst our athletes in their first season.

However, our athletes do make key observations early on, before they even race and see results.

By using this model, our athletes race stronger/faster, enjoy the experience more and recover much faster than their peers. Their aerobic fitness is high, their strength is high and therefore, their race pace (threshold levels) is high.

Others reversing periodisation for triathlon benefits

We are not the only ones using this approach.

We are not alone, but in the minority, which is good for both us as coaches and you as athletes!

Traditions sometimes need to be broken! Not because they are wrong, because there is a more specific / efficient way of doing things. “Traditional” / linear periodisation works best for single discipline sports that are strength and power focused.

Those that continue to follow the traditional prioritisation model will continue to progress. But what development, health and performance benefits would they gained sooner and more safely had they chosen a different periodisation model?

Are you willing to go against traditional to gain better health and results?